Road map
Back to all reports

Reported via mobile in the Flytipping category anonymously at 11:26, Thursday 4 February 2021 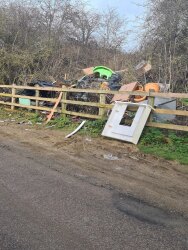 There has been another huge fly tip on highways england land on a commercial level. There is significant amounts of fly tipping on Chadwell road and on dyes lane highway land. As a community we have worked so hard to address the issues here and leaving the rubbish is just not an acceptable situation - can the entire area be cleared please. Also on the highway land in Norton green the fence has collapsed - it has been removed as fell down the bank but HE have still not replaced it. Can this also be addressed.